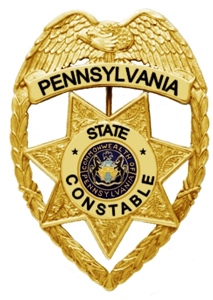 Definition of a Pennsylvania Constable

A constable is an elected official and serves six-year terms.

Constables belong to the executive branch of government.  As such, they are answerable to the governor of Pennsylvania.  They perform services for the Pennsylvania Magisterial courts, but do not belong to the judicial branch.

In Pennsylvania, constables are peace officers.   As such, they are also empowered to quell a disturbance of the peace.   A disturbance of the peace in Pennsylvania is defined as an imminent threat or danger to persons or property.   For example, if a constable observes a public brawl, then the constable may arrest the participants for breaching the peace.  According to Pennsylvania common law, a citizen may also have a limited power of arrest commonly known as a citizen’s arrest for felonies committed in view, but they are not given the shroud of authority a constable, sheriff or other law enforcement officer is given.

Duties of a Constable

Protecting the Polls
Constables are also charged by Pennsylvania statute with maintaining order at election polls and ensuring that no qualified elector is obstructed from voting.  Constables are the only peace officers permitted at the polls on Election Day.  In fact this duty is mandated upon constables; failure to protect the polls, or provide for their protection through appointed deputies, is punishable with a fine.

Working for the Courts
Constables may serve the court, but are not required to. When serving the judiciary, constables may serve judicial process, writs, arrest warrants, levies and collect fines. These services are regulated by Act 49 of the Pennsylvania statutes. The constable is paid for these services by fees which are specified in the statutes, and paid by the defendant in criminal cases or the plaintiff in civil cases.

Constables may also serve civil process.  Unlike judicial services, civil process may be served by any able-bodied adult, and so does not require a constable.  Constables or Sheriff's are required when enforcement of court orders is necessary.

Constable's can provide security for the local bail wick or any other security at any county level. Some constable's work for other county police to provide traffic control plus security at certain events.

Training
Constables are required to complete Act 49 certification and training before performing any court duties, including execution of arrest warrants.   In order to carry a firearm , Constables must complete the firearms-portion of Act 49 as well.

Discipline and Removal
A Pennsylvania Court of Common Pleas judge may remove a constable for misfeasance, malfeasance, or acts of oppression.   Malfeasance is defined as a breach of a positive statutory duty or of performing a discretionary act with an improper or corrupt motive.   If a court finds that a constable committed misfeasance, malfeasance, or acts of oppression, the court may then find that the constable is unfit for office and remove him from office as constable.

Deputy Constables
Each constable may, with approval of the President Judge in the county the constable is elected in, appoint deputies to work under his authority. Each deputy is given the same authority as the constable himself, but serves at the pleasure of the elected constable.